There is a balsam, or indeed a blood,
Dropping from heaven, which doth both cleanse and close
All sorts of wounds; of such strange force it is.
Seek out this All-heal, and seek no repose,
Until thou find and use it to thy good.
(George Herbert, An Offering)

Hanging on our hallway wall is a print by Roy Henry Vickers, an artist whose work reflects indigenous West Coast culture and the surrounding natural environment. My wife and I purchased the piece on our honeymoon while visiting his studio on Vancouver Island. It’s a painting of the half-bloodied face of Christ in a traditional indigenous motif. When we first noticed it we were enamoured by the artistry and depth. But now, in truth, most days I don’t like to look at it because it’s also clearly a vision full of pain. So there it hangs in our hallway, both beautifully and awkwardly. 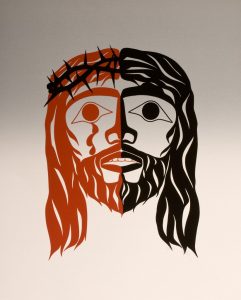 Of course that’s the idea and to some extent why we bought it to begin with. We knew a piece like this would help to put a face and a name on some of the intangibles of faith, not to mention the important history it suggests. It’s a kind of icon, I suppose; something to look through in order to see something else. That something else changes daily, the vision shifting and growing. What I saw yesterday is not what I see today. Horror turns to beauty, sorrow turns to comfort, and visa versa – it depends on the moment.

That’s what we see when we look at a crucified Jesus. Through the cross we’re observing something not one-dimensional, but multi-dimensional, which is why simple “explanations” of the cross don’t work as it doesn’t exactly scale down into a soundbite –  quite the opposite. So given time our vision of the cross deepens as our roots sink further into its strangeness and sadness and joy. But that’s only possible if we don’t look away, which is difficult because that’s a reasonable response when stumbling upon a cross.

Crucifixion was not only a humiliating and torturous death penalty but a billboard, taking place in public and for the public. “If you cross us”, said those in power “we’ll cross you.” So the cross has always been a sign saying, “don’t look away – take notice”. And the cross still says this, only now so in a different light. That doesn’t mean, of course, it’s become any easier to hold our gaze, to fix our eyes on what and who is fixed there. It’s still easier to look away.

We get very used to looking away or looking the other way. If we don’t like where we’re living, we move. If we don’t like going through a certain part of town that’s a little rundown (perhaps scattered with a few too many stray shopping carts covered with tarps) then we take another route. If we’re bored we go on vacation for a change of scenery and to “get away from it all”. If we don’t like looking at ourselves we stare instead at other more exciting versions. And together with such unprecedented access to information we can now also control, sanitize and personalize whatever information comes our way, free to determine endless settings. In other words, we’ve become masters of looking at what we want to look, perhaps looking rarely at what we need to look.

That’s why a clear vision of the cross is central in the life of anyone who calls themselves a follower of Jesus. The cross is where we look to acknowledge much of what we’d rather ignore: our failure and pain, our pride and greed, our loss and disappointment. It’s where we look in order to see the truth and to be healed, to take in as much as possible and be renewed. With a clear vision of the cross we willingly submerge ourselves into the vision of Jesus’ baptism of human failure and death.

Lent is the season preceding Holy Week and Easter. Very thinly put, it’s a time where many Christians give something up in order to remember their dependance on God in preparation for everything Passion Week holds. So in a sense Lent is about letting go of other visions and lenses and choosing not to look away but at everything through the lens of the cross. In doing so the delusions fade and we begin to see God for who God really is and ourselves for who we really are. What else might we see?

We may see that God has made a place for our failure, or that God isn’t removed from our suffering and promises to both join us in it and make a way through. We may see the pain of those around us and the hope that comes by joining them. We may see darkness or light, beauty or horror. It probably depends on the day. But it begins with choosing not to look away and letting a vision of the cross shape our vision. It will be uncomfortable and difficult at first –  perhaps always – looking like everything we want to look away from. It will undoubtably look like “sorrow and love flow(ing) mingled down” as Issac Watts wrote. But we don’t look away, because the cross holds the truth, and the truth makes a way toward freedom.

Questions for discussion / reflection:
– In what ways do we look away from what we need to loot at?
– What have you seen “through the cross” that brought healing and hope?
– Given the traditional season of Lent, at what might we stop looking (or let go of/give up) in order to better see? What practical ways can we look at God through the cross in order to grow in this season?
– What do you sense God wants you to see through the cross this year?