“Glory to God in the highest, and peace on earth to those with whom God is pleased.”
(Luke 2.14)

My wife and I recently wandered through the Christmas decoration department of a local store. Among the ornaments and other trappings was a particularly large nativity set. All the regular characters were present (shepherds, angels, etc.) the only anomaly being that baby Jesus lay not in what St. Luke records as “swaddling clothes”, but instead in bubble wrap. A store associate, concerned the piece was fragile, must have safeguarded Jesus should any danger befall him. Jesus in bubble wrap is a strange idea because it’s not the real story, which paints a very different picture. The gospels tell us Jesus didn’t have a safe life, 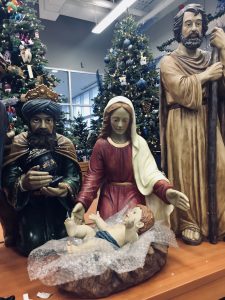 isolated and protected from potential damages. From his birth to his death Jesus was targeted, pursued and plotted against; a life that seemed anything but comfortable or peaceful. Yet peace is the message proclaimed at Jesus’ birth: “Glory to God in the highest, and peace on earth to those with whom God is pleased.” (Luke 2.14) Somehow, peace would be the result of Jesus’ disquieted story.

Peace is something world leaders like to talk about, but it doesn’t often seem to be a peace for everyone, just for the people on the right side of this or that line, those backing this or that party. Of course the promise of peace has always been politically popular. In Jesus’ day the Roman Empire prided itself on “Pax Romana”, the peace they brought to bear on the world. But peace for Rome meant oppression and tyranny for her enemies. We have our own versions of tyranny today. One group’s peace and security is often dependent on the control or neglect of another. The peace we often hear about in the news (even in our own neighbourhoods) is many times a peace that has to do with imposition, control or neglect. Peace still tends to be reserved for the people with power, and to an extent we are all implicated in that reality.

I once heard a story of a desert monk who found himself constantly annoyed by others in his monastic community. His solution to the problem was to move out of the monastery and into a deserted cave to live alone. Surely there he would be able to grow in peace and holiness with God. One day he was filling a 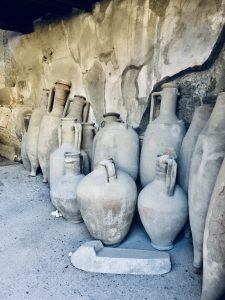 pitcher and it fell over, spilling the water everywhere. He fetched more water and tried again with the same result: a spillage and waste. He fetched and poured a third time and when it toppled again, he snatched the jar up and threw it against the cave wall, smashing it to pieces in a fit of frustration. As the story goes it was then he realized the problem was not beyond him, out there, but within him. He moved back to the monastery to grow in peace and holiness together with his fellow monks.

When it comes to a lack of peace in the world it would be easy to point fingers at this or that group, this or that government, but sooner or later it dawns on us that we’re probably part of the problem. The problems of power and peace don’t live out there but within. I’d suggest that’s one reason to pay close attention to how Jesus arrived and how his life unfolded. If anything was going to change in the world, it was going to change from within. That’s exactly what we see through the incarnation – God working from within the world to bring a new kind of peace; God working from the inside out, starting small and growing.

The news we hear at Jesus’ birth is about a new kind of peace: a peace for everyone achieved through means other than imposition, control or neglect. Through Jesus the world would see power reimagined so that peace would be extended to everyone, not only the privileged, not from outside, but within. God’s peace brought to bear on the world, say Jesus’ biographers, would look different than Caesar’s or Pharaoh’s. This would mean peace achieved by understanding and using power differently.

Jesus’ life says, in one sense, to forget everything we think we know about power. Here is a figure described as “God with us”, born of “the Most High”, someone destined to be “great”. But Jesus’ life and death didn’t look great at the time. Jesus gets pushed around. Jesus refuses to impose on people even when people impose on him quite regularly. Jesus doesn’t argue his own case when his life hangs in the balance. And yet we’re told this is “the Most High”, someone “great”, “God with us.” Somehow the writers of the gospels (and the rest of the New Testament) are trying to tell us that the kind of peace Jesus’ life ushered into the world, through the way he understood and used power, was different from our own. Here, for the first time, is a life so imbued with God’s life that we are shown what real power is, and therefore what real peace looks like. Power and greatness, say Jesus’ first followers, isn’t about control and imposition, but sacrifice and service. They certainly didn’t claim to have this entirely sorted out but were willing to readily admit they’d met someone who had (hence why Jesus’ biographers don’t portray his first followers as heroic figures, more like a wobbly bunch, just struggling to keep up).

Jesus teaches us that true peace only comes through wielding our power differently. His first followers found that this takes some getting used to, and, whether we like it or not, some trial and error. So, rather than using our power to isolate and serve ourselves, we choose instead to drop our guards and serve one another. Rather than only loving ourselves, we learn to love our neighbours. This is not only Jesus’ 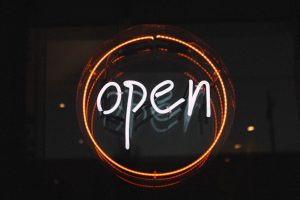 teaching, but his example. Here is a God happy to be born into hay for our benefit; who says “your will not mine” to fists and spit and whips. As others have noted, when God wanted to bring peace to the world he didn’t send in the tanks. God came as a baby; God picked up a cross.

Perhaps there’s not only something of a lesson in that for politicians and governments, but for the rest of us too. How will we choose to bring about peace in our communities, even our homes? Will peace be all about us, or about everyone? Will we send in the tanks, or send in ourselves, guns down, arms open? Will we stop shouting and instead try to listen? Will we call a ceasefire to the silent treatment and manipulation, and really look one another in the eye? If we want to join in with the peace Jesus brings it will mean putting an end to controlling each other and shutting one another out. It will mean vulnerability and humility. This is how God brings peace to bear on the world through the life of Jesus, even if we’re uncomfortable with his methods. This is what will lead us into real peace, a peace for everyone, not just for those who sit in power.

Of course, no one could expect this kind of endeavour to be easy. Living for peace will mean a life without bubble wrap, a life where we’re willing to take the first step into the neutral zone. Real peace will always have something to do with sacrifice and patience, and so the path to real peace will often be the road less traveled. But Christmas tells us that God has taken that road, and that everyone the world over is invited to follow behind.

“Because of God’s tender mercy, the morning light from heaven is about to break upon us, to give light to those who sit in darkness and in the shadow of death, and to guide us to the path of peace.”
(Luke 1.78-79)