Hope is the thing with feathers

That perches in the soul,

And sings the tune without the words,

And never stops at all

Whenever I preside over a funeral or memorial, joining with and serving people in grief, there’s often talk about the last experience shared with the loved one being mourned. We cherish all we can in those final moments, hoping to glean some comfort, some sense of meaning while facing the pain and mystery of death. Usually people will remember, or at least try to remember, the last thing a loved one said to them. 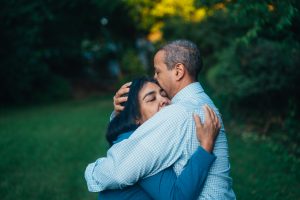 Perhaps words from a hospital bed, or a phrase uttered just before stepping out the door for the final time, or even a cry or coo from an incubator. People say things like, “He told us he loved us and how thankful he was that we were all there in those final moments.” or “The last time I saw her we had an argument and I’m having a hard time with that now.” or “They seemed at peace to me and squeezed my hand and I think they felt comforted at the end.”

When we arrive at the dramatic climax of John’s gospel we witness such a moment, we hear such words from Jesus. There on the cross, in the middle of misery and darkness, Jesus says something both expected and, as John would hope to show us, totally unexpected at the same time: “It is finished.” Predictable final words, we might imagine, from a tortured and tired crucifixion victim thankful that the end is near. Words that, at first, caused those who followed and loved Jesus to despair. Was that it? Was that everything Jesus’ life would amount to? Were those words the full stop at the end of an otherwise promising sentence? John hints that there’s something more going on within those words and because of those words. And that something more is what all of Christian life is built upon.

What is finished exactly? Followers of Jesus have been trying to understand, enjoy and explain that since the very first Easter Sunday. The writers of the the New Testament would lead us to believe that what is finished for Jesus, what is ending as his life ends, is also finished for us. The final words of Jesus, verified by his resurrection, say that death doesn’t get the last word. Jesus’ work on the cross (as one scholar puts it) is the completion of a great rescue mission, of God saving the world from death itself. So, rather than despair, “It is finished” are words that point toward hope, toward a way beyond the finality of death itself. That is quite the claim about Jesus’ final words in John’s gospel, but it’s the claim the first Christian communities were founded on and the claim Christians still make today.

When you sit with a person in grief, often someone who feels like they’ve lost everything, you have two choices. You can choose to face the reality of death along with them or to avoid it. Usually the people who avoid that reality will also be the ones who avoid a grief-stricken person in the first place (though sometimes they come round to offer some quick fix of a phrase which, though offered in kindness and might be true in some sense, doesn’t always help). This, no doubt, is part of our uncomfortableness with death today, part of our unwillingness to face what we can’t control. And so we tend to skim over death, pretending it’s as inconsequential as the mail, and move on to the next thing. Eventually, of course, you 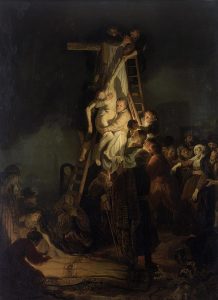 have to stop skimming because death is a reality you can’t avoid and must one day face yourself. And that’s the other choice which, in the end, we realize isn’t really a choice at all. Everyone will face death, and try as we might to avoid it or skim over it, death is a reality that puts us all on equal footing. We are bound together in death, “diminished” together as John Donne puts it. “Never send to know for whom the bell tolls; It tolls for thee.” So when we face another’s death we are, in some sense, always facing our own. For many people that’s not something very high on the to-do list each week, which is entirely understandable.

But what we all share in, the universality and reality of death, is not the final word according to the New Testament. As much as we are bound together in death, Jesus’ own life, death and resurrection means we can also be bound together in abundant life. If, as Donne says, “any man’s death diminishes me”, St. John says, “this one man’s death enriches us all.” That is to say, when you or I die the world becomes less, but when Jesus died the world became infinitely more. Jesus’ finishing words and work, seen through the cross and resurrection, were really a beginning, an opening up into new life, life to the full, the kind of life that stands over against death once and for all. This is the great Christian hope and the heart of the Easter message. And this is why St. Paul can write to the Thessalonians reminding them they needn’t endlessly despair or grieve without hope when a loved one dies. Death is painful, death is mysterious, death is universal. But the life of God, life offered to the entire world through Jesus, has triumphed and will triumph in the end.

Good Friday and Easter Sunday means that we needn’t skim over death or avoid it, not just because death is inevitable but because it is not the ultimate reality. Facing death then, for each of us, can be a facing of life, the very life of God that raised Jesus from the dead.