Hey friends! We’re re-releasing When God Was Little chapter by chapter over 12 days via my blog as a lead up to Christmas. Would you consider sharing the posts when they pop up? 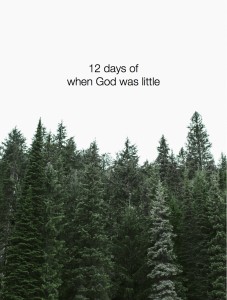 It might be nice for more people to read about how Christmas shapes our understanding of God in a more accessible format (how fitting). Of course you can still order the book online, with all proceeds this year being donated to the Salvation Army’s Gateway of Hope in Langley.

Thanks for considering! Here’s the journey: