St. John has rather affectionate and accurate titles for his listeners in the letter we first credit him. “Little children” is found amongst John’s addresses along with “brothers and sisters” and “beloved”. These terms convey a certain fond and compassionate sentiment, even in the midst of John’s stout teaching. The letter is full of robust and comprehensive challenge: do not love the world; be sure love one another; do not say you love your brother or sister and not practically care for them. 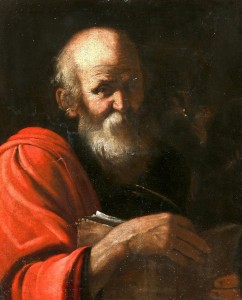 It is the appellation “little children” that has most captured my imagination over the years. Used just twice, and in such close proximity, I have often wondered why the apostle chose this term for these specific moments in the letter (2.1, 2.12). Where we otherwise find “beloved” sprinkled liberally, why the special appropriation of “little children” in chapter two? In 2.1 John even uses “my”, personalizing his association with the audience profoundly.

“My little children” may not be John’s most generously utilized term, but it is wheedled in the first direct address of the listener. Chapter one sounds like prologue, with chapter two beginning with the “little” label. It is perhaps what is laid out in the prologue that leads us to such a term.: The Christology is clear, themes of light and darkness are ever-present, and atonement theology arrives right up front. John then moves into a more direct appeal about how his listeners are to live in the light (to use his language) of his opening declarations. The softness of “my little children” carries his heart as the weight of the instruction settles on those listening.

I feel the term is more than mawkish, however, though it is no doubt it full of jealously, benevolence and concern. But the aged John knew the inherent power in addressing his audience with such specificity. “Little children” hardly conveys his affection for them more than the recurrently used “beloved” throughout the letter. And so the designation must have more to do with whom they are than how John feels about them. Does he aim to heighten their self-awareness?

For John, it is only when we understand that we are God’s children that we learn to live like him. Though, he says, “it has not yet appeared as yet what we will be” (3.2), we are still considered fully-fledged children of God in the meantime, “for such we are”. But John is under no pretences about the nature of his listeners. For him, they are infants.

They are young, dependent, unlearned, and, based on the nature of his instruction in the letter, still immature in the simple modes of Godly living. But, just like John’s writing, what seems simple is not necessarily without depth and challenge. The simplicity of Godly living is no easy endeavour. “Little children” would certainly befit a group not yet exhibiting wise Christian character, still in need of nursing. And so he finds it fitting not only to address his listeners with fondness, but precision.

We would be wrong, however, in assuming the term is intended to belittle. This is what gives me pause as we try to live out the apostle’s hope that we love God as Father, and subsequently one another as brothers and sisters, when we “live in the light, as he is in the light”. Innate dependency and humility are found within the leading title in 2.1 and are traits John hopes his audience will embody in order to grow.

I imagine John never forgot the time Jesus “called a child to Himself and set him before them, and said, “Truly I say to you, unless you are converted and become like children, you will not enter the kingdom of heaven. Whoever then humbles himself as this child, he is the greatest in the kingdom of heaven.” (Matthew 18.2)

By remembering our place as “little children” Christians more easily grasp the rudiments of faith, our maturation quickening via the modest attitude such a title bestows.